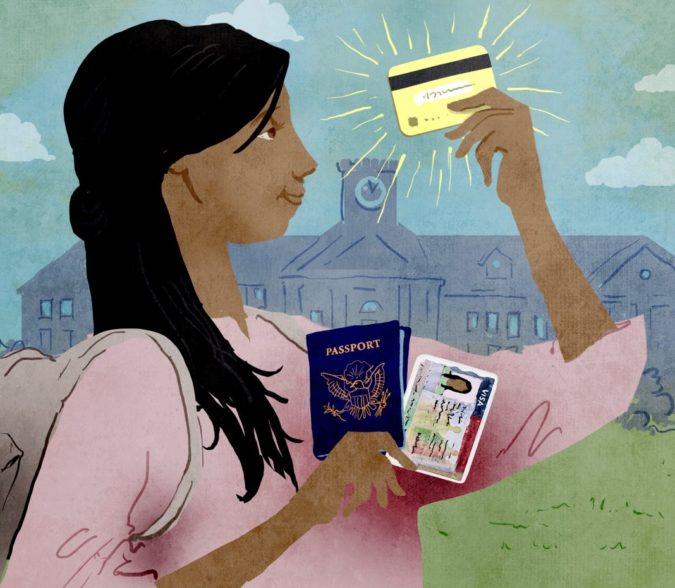 The United States isn’t a cashless society, but few people walk around with enough dollars to pay for everything in cash.

Most Americans, including college students, carry a credit card in their wallets. They prefer the convenience of swiping credit cards in stores and using them to order things online, or even to pay for a ride from a taxi or car-sharing service.

But it’s not easy for the 1 million international students at U.S. colleges and universities to find a lender willing to issue them a credit card. Banks usually ask for a Social Security number, which the students may not have. And they want to see a good credit history to be sure students can be trusted to make payments — but it’s hard to build a history without a credit card.

A startup founded by entrepreneur Kalpesh Kapadia is changing all that. Kapadia was once a credit card–less international student himself. He came to the United States from India 20 years ago to earn an MBA before becoming successful on Wall Street.

The students must prove they are a good risk. Just 25 percent of the students who have applied since the company’s launch in March 2016 have been approved.

Kapadia says fewer than 1 percent of those using the cards are late on monthly payments.

Maru Castellanos, a microbiologist from Guatemala completing a doctorate in epidemiology at the University of Georgia, opened a bank account after coming to the United States on a Fulbright scholarship in 2014. To her surprise, her bank refused to issue her a credit card.

“Everything was like a circle,” said Castellanos, who is on leave from teaching at the Universidad del Valle and had a card with a generous credit limit back home. She had no credit history in the United States. “No one wanted to give me a card,” she said. SelfScore issued her one in less than two weeks.

Jack Guo, a UCLA student from Beijing, says having a credit card “makes it easier for students to get around town” and order food online.

SelfScore starts borrowers off with a $500 spending limit, then boosts it in steps to $1,000 or $1,500. There’s no annual fee and no interest if cardholders pay their balance in full each month.

Those who carry a balance pay 19.24 percent annual interest but, like two-thirds of American credit-card holders, a large majority pays promptly and never incurs interest.

It’s an attractive market for SelfScore. “Someone who comes here [from] 10,000 miles away to make their life better through education” is a safe bet, Kapadia says. “This is a highly motivated population.”