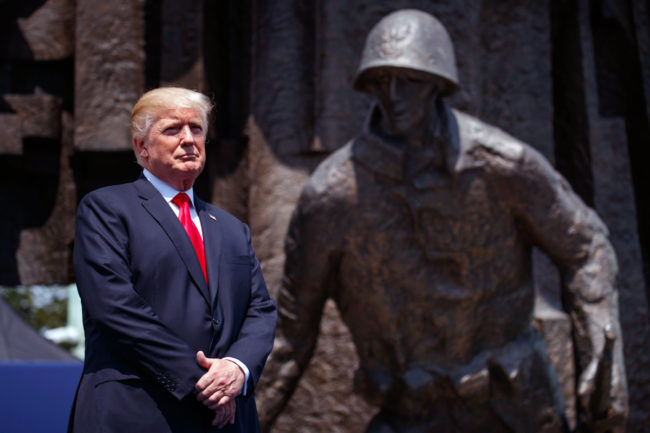 President Donald J. Trump affirmed on July 6 the U.S. commitment to Poland, Central and Eastern Europe, and the NATO alliance while emphasizing support for national sovereignty and independence.

“A strong alliance of free, sovereign and independent nations is the best defense for our freedoms and for our interests,” President Trump said in a July 6 address to the Polish people in Krasiński Square in Warsaw.

The president visited Poland in advance of the July 7–8 meeting of the world’s 20 largest economies, to be held in Hamburg, Germany. It is his second overseas trip since assuming office.

While in Poland, President Trump met with Polish President Andrzej Duda and spoke to regional leaders of the Three Seas Initiative, which works to increase economic engagement among 12 Central and Eastern European countries around the Baltic, Adriatic and Black seas and between those 12 states and Western Europe.

“The Three Seas Initiative will not only empower your people to prosper, but it will ensure that your nations remain sovereign, secure, and free from foreign coercion,” the president said.

He noted the United States’ recent delivery of liquid natural gas to the region and said the development of the U.S.–European energy trade is a crucial element of future growth.

“When your nations are strong, all the free nations of Europe are stronger, and the West becomes stronger as well,” the president said.

President Trump also reaffirmed the U.S. commitment to Article 5 of the North Atlantic Treaty Organization, which states that an attack against one member is an attack against all. The United States provides almost 70 percent of NATO’s forces.

“The United States has demonstrated not merely with words, but with its actions, that we stand firmly behind Article 5, the mutual defense commitment,” he said.

President Trump also applauded Poland for being among the countries to meet its NATO pledge of spending 2 percent of GDP on defense. “Poland is not only a great friend, but a truly important ally,” the president said.

The remarks had a special resonance in Poland, where the United States has deployed about 5,000 troops and is helping to train the Polish military. Polish troops support U.S. and NATO missions in Iraq and Afghanistan.

In his meeting with President Duda, President Trump congratulated Poland on its recent election to the United Nations Security Council.

“Poland joins the Security Council at a very critical time,” President Trump said. “Not only must we secure our nations from the threat of terrorism, but we must also confront the threat from North Korea.”

The president called on all nations “to confront this global threat, and publicly demonstrate to North Korea that there are consequences for their very, very bad behavior.”

His statement echoed the comments made the day before by Nikki Haley, U.S. ambassador to the United Nations.

“The triumph of the Polish spirit over centuries of hardship gives us all hope for a future in which good conquers evil, and peace achieves victory over war,” the president said.