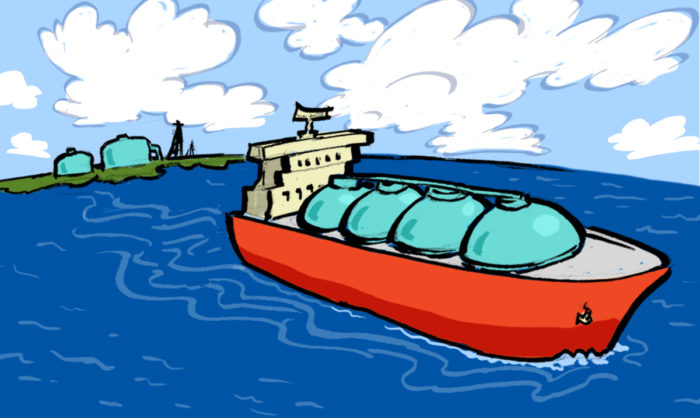 When you switch on a light or fire up the stove, do you think about where your energy comes from? Probably not, until the lights go off.

Technology allows natural gas to come from anywhere in the world — in liquid form. In the past, producers transported natural gas only through pipelines. Today, liquefied natural gas, commonly known as LNG, can be chilled and safely transported via specialized tanker ships and delivered anywhere with LNG facilities. That’s a big deal for countries’ energy security.

Natural gas, which consists mostly of methane fuel located under the Earth’s surface, is expansive. But if you cool it to a chilly minus 162 degrees Celsius, natural gas turns liquid. Natural gas takes up 600 times less volume in its liquid form, which makes it easy to store and ship anywhere in the world.

Liquefied natural gas can be carried across oceans in tanker ships using specialized double hulls. These vessels are huge — up to 345 meters long.

After delivery, LNG is turned back into a gas — either at an onshore plant or a floating platform — and piped through existing gas networks.

Is LNG safe on tankers?

Absolutely! The LNG shipping industry has an exemplary safety record, according to a report from Sandia National Laboratories, a U.S.-funded research and development center. LNG has been transported safely for more than 40 years. Only eight accidents occurred in that time: No lives were lost or significant gas spilled.

One reason for the good safety record is that LNG is only flammable if vaporized, and is less flammable than other fuels. Also, LNG tankers are built to be more robust than typical fuel tankers.

The LNG tanker fleet is young and growing, with about 55 percent of vessels younger than 11 years old.

The ability to store and transport liquefied natural gas in specialized ships allows for a global marketplace for natural gas. Exporters can step in to provide stable sources of the fuel and are already creating more efficient and transparent markets where buyers can get better prices.

Japan and Korea are the world’s top two LNG markets. But European countries also are increasingly importing LNG to diversify their energy supplies and strength their energy security.

Since February 2016, more than 130 cargoes of American LNG have left the Gulf Coast to more than 20 countries. The administration plans to bolster energy exports as part of its “Unleashing American Energy” plan.