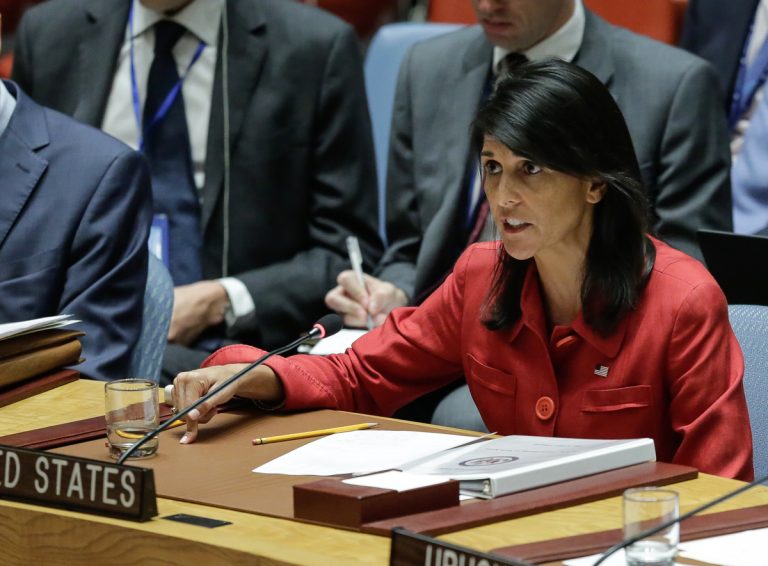 “Today is a dark day,” said U.S. Ambassador to the United Nations Nikki Haley as she condemned North Korea’s “reckless and irresponsible” missile launch of July 4.

Speaking at an emergency meeting of the U.N. Security Council on July 5, Haley called the launch a “clear and sharp military escalation” and said North Korea’s actions threatened all nations.

The United States, South Korea and Japan called the meeting after North Korea launched the intercontinental ballistic missile — which flew for 30 minutes and reached an altitude of more than 2,000 kilometers — violating sanctions imposed on the country by the world community.

The North Korean regime has stated that its missile program is designed to strike cities in the United States, South Korea and Japan with nuclear weapons.

“The launch of such ballistic missiles is a serious threat to our country,” Japanese Defense Minister Tomomi Inada said.

A call to action

“Time is short. Action is required. The world is on notice,” Haley said. “If we act together, we can still prevent a catastrophe, and we can rid the world of a grave threat.” She urged the international body to cut off major sources of hard currency, stop the flow of oil to North Korea’s military and weapons programs, and hold senior members of the North Korean regime accountable.

“We have great capabilities in the area of trade,” she said. “There are countries that are allowing  — even encouraging — trade with North Korea in violation of UN Security Council resolutions. Such countries would also like to continue their trade arrangements with the United States. That’s not going to happen. Our attitude on trade changes when countries do not take international security threats seriously.”

She noted, “For many years, there have been numerous UN sanctions against North Korea. But they have been insufficient to get them to change their destructive course.”

Former Secretary of State Rex Tillerson said, “All nations should publicly demonstrate to North Korea that there are consequences to their pursuit of nuclear weapons.”

“As we, along with others, have made clear, we will never accept a nuclear-armed North Korea,” the secretary said in a July 4 statement.

Haley said the U.S. is prepared to use military force as a last resort to protect friends and allies. “We will not have patience for stalling or talking our way down to a watered-down resolution,” she said.

“We will work with any and every country that believes in peace. But we will not repeat the inadequate approaches of the past that have brought us to this dark day,” Haley said.