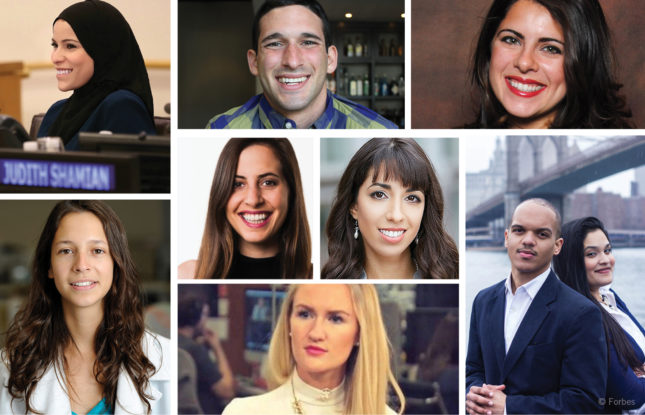 One studied in Hong Kong and today prepares the next generation of tech leaders. Another, a former exchange student in Spain, helps journalists in conflict areas. Another is the only United Nations high-level commissioner under the age of 45.

They made Forbes’s annual 30 Under 30, which recognizes bright young entrepreneurs, breakout talent and change agents in 20 different professional sectors.

They also had participated in State Department exchange programs early in their careers.

Meet the eight on the Forbes list who are alumni of these educational and cultural affairs programs:

Emilia Javorsky was recognized for her work as a physician-scientist at Massachusetts General Hospital, where she worked to develop a method for freezing fat anywhere in the body. The work has the potential to treat sleep apnea and Type 2 diabetes. She was a Fulbright student to the European Union in 2012.

Evin Robinson participated in Syracuse University’s study abroad program in Hong Kong as a Gilman Scholar in the fall of 2011, where he focused on business and Mandarin. Three years later, he co-founded New York On Tech, an organization that aims to create pathways for underrepresented students into degrees and careers in technology.

Making history at the U.N.

Alaa Murabit is the only United Nations high-level commissioner under the age of 45. Admitted to medical school at age 15, she later founded Voice of Libyan Women, a nonprofit to help people in her home country. She participated in the State Department’s Middle Eastern–Western Dialogue program in 2013.

Noam Angrist, a Fulbright student to Botswana in 2013, co-founded Young 1ove there. It teaches students about sex education and HIV/AIDS. The organization is piloting programs in South Africa and Zimbabwe.

Lexie Komisar is a founding member of IBM Corporation’s Digital Innovation Lab, which recently released tools to help developers use Watson, the company’s artificial intelligence platform. She studied public health in Mexico on a Fulbright scholarship in 2009.

Gloria Tavera studied in Mexico in 2009 and is now a founding member and current president of Universities Allied for Essential Medicines. The organization works to improve access to affordable medicines around the world.

Adina Appelbaum studied in Egypt in 2010 and created the Crim-Imm Pro Bono Project, which provides access to criminal immigration legal counsel in the U.S.

Anna Therese Day is a founding member of Frontline Freelance Register, which helps journalists in conflict areas. She studied in Spain in 2013.

Follow in their footsteps. Apply for a Fulbright scholarship or another exchange program.