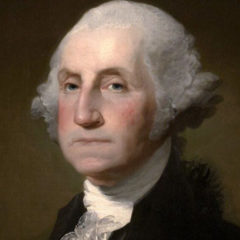 George Washington February 22, 1732 – December 14, 1799 was an American political leader, military general, statesman, and Founding Father who served as the first president of the United States from 1789 to 1797. Previously, he led Patriot forces to victory in the nation’s War for Independence. He presided at the Constitutional Convention of 1787 which established the U.S. Constitution and a federal government. Washington has been called the “Father of His Country” for his manifold leadership in the formative days of the new nation.

Washington received his initial military training and command with the Virginia Regiment during the French and Indian War. He was later elected to the Virginia House of Burgesses and was named a delegate to the Continental Congress, where he was appointed Commanding General of the Continental Army. He commanded American forces, allied with France, in the defeat and surrender of the British during the Siege of Yorktown, and resigned his commission in 1783 after the signing of the Treaty of Paris. 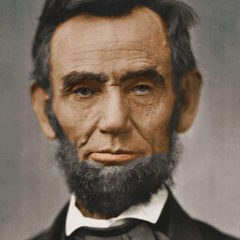 Abraham Lincoln (February 12, 1809 – April 15, 1865) was an American statesman and lawyer who served as the 16th president of the United States from March 1861 until his assassination in April 1865. Lincoln led the nation through the American Civil War, its bloodiest war and its greatest moral, constitutional, and political crisis.He preserved the Union, abolished slavery, strengthened the federal government, and modernized the U.S. economy.

Born in Kentucky, Lincoln grew up on the frontier in a poor family. Self-educated, he became a lawyer, Whig Party leader, Illinois state legislator and Congressman. In 1849, he left government to resume his law practice, but angered by the Kansas–Nebraska Act’s opening of the prairie lands to slavery, reentered politics in 1854. He became a leader in the new Republican Party and gained national attention in the 1858 debates against national Democratic leader Stephen Douglas in the U.S Senate campaign in Illinois. He then ran for President in 1860, sweeping the North and winning. Southern pro-slavery elements took his win as proof that the North was rejecting the constitutional rights of Southern states to practice slavery. They began the process of seceding from the union. To secure its independence, the new Confederate States of America fired on Fort Sumter, one of the few U.S. forts in the South. Lincoln called up volunteers and militia to suppress the rebellion and restore the Union.