Jordan’s dramatic desert landscapes have played the role of Mars and served as the setting for Indiana Jones in American films.

To many, Jordan has become the Hollywood of the Middle East.

Recent hit films, such as the The Martian (2015), Rogue One: A Star Wars Story (2015) and The Last Days on Mars (2013) were all shot in Wadi Rum, a protected desert wilderness in southern Jordan, where stunning red sand and majestic sandstone rock formations double for an alien planet.

The Zalabia and Zuwaydeh Bedouin tribes inhabit the area, and many make a living as professional tour guides, escorting visitors through dagger-like passages. Others appear as extras and some land supporting roles in the films themselves. (A Hollywood production first hired the Bedouins of Wadi Rum in 1962 to help film Lawrence of Arabia.)

Beyond Jordan’s deserts, filmmakers are drawn to the country’s forests, its cities and the Dead Sea. The ancient city of Petra, legendary for its architecture carved into sandstone mountains, is a favorite location. Established as an important caravan stop by the Arab Nabataeans around 300 B.C.E., Petra is now Jordan’s most famous tourist attraction and has been featured in Hollywood hits such as Indiana Jones and the Last Crusade (1989), The Mummy Returns (2001) and producer Steven Spielberg’s Transformers: Revenge of the Fallen (2009).

American film producers also rely on Jordan’s talented film crews for lighting, sound, makeup, cameras and all aspects of production services. More than 150 movies have been filmed in the region since the creation of Jordan’s Royal Film Commission in 2003 and the development of its highly skilled workforce.

Jordan’s Royal Film Commission recently won the prestigious Outstanding Film Commission Award for its production support for foreign filmmakers. The commission’s vision is to “build in Jordan a world-class, cutting-edge film industry where all people of the Middle East can freely make films alongside the world’s most talented artists,” according to its website.

Its mission is succeeding: In 2016, Theeb was nominated for an Academy Award for Best Foreign Language Film — the first Jordanian film to earn an Oscar nomination.

Jordan’s King Abdullah II met with the cast and film crew of Theeb following their nomination and told them, “Not only Jordan, but the entire Middle East is proud of you,” the Jordan Times reports.

The king has emphasized the kingdom’s keenness to partner with the American film industry. He met with leading U.S. filmmakers in 2014 to highlight Jordan’s success in cinematic production.

One successful partnership is between the University of Southern California and the Royal Film Commission in their joint establishment of the Red Sea Institute of Cinematic Arts in Aqaba. The institute trains men and women throughout the Middle East and North Africa region in all aspects of filmmaking.

The president and King Abdullah II have met twice in Washington in 2017. At the National Prayer Breakfast on February 2, the president emphasized that the United States is committed to strengthening the security and economic partnership with Jordan.

“America has looked to Jordan as a valued partner, an advocate for the values of civilization, and a source of stability and hope,” the president said at the White House in April. 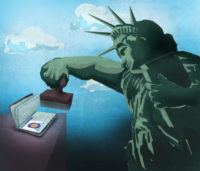